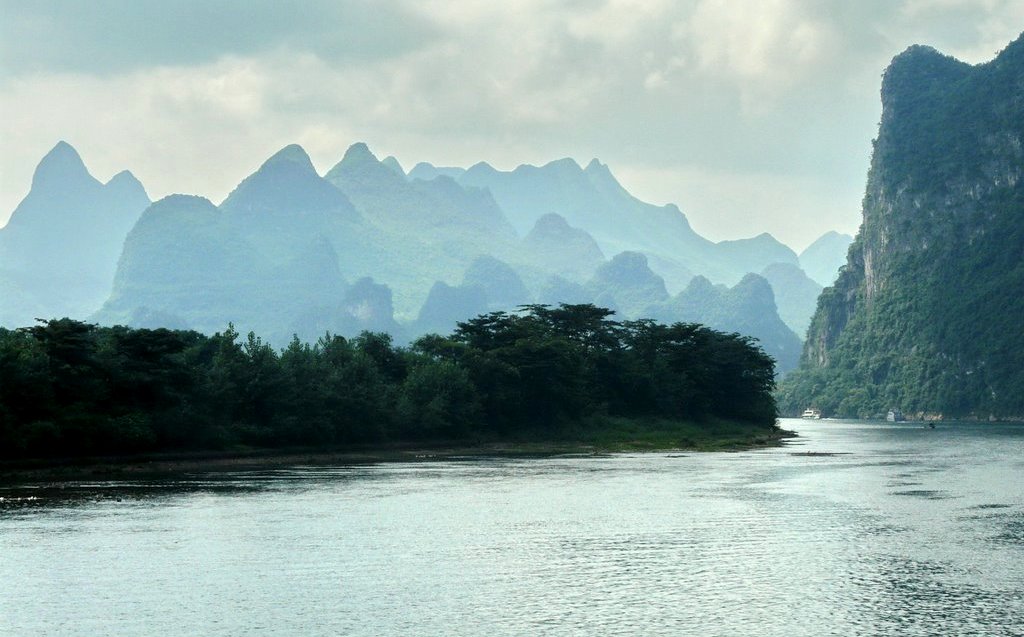 The Li River originates in the Mao’er Mountains in Xing’an County and flows in the general southern direction through Guilin, Yangshuo and Pingle. In Pingle the Li River merges with two other streams, and continues south as the Gui River, which falls into the Xi Jiang, the western tributary of the Pearl River, in Wuzhou.

The upper course of the River Li is connected by the ancient Lingqu Canal with the Xiang River, which flows north into the Yangtze; this in the past made the Li and Gui Rivers part of a highly important waterway connecting the Yangtze Valley with the Pearl River Delta.

From Guilin and the town of Xingping (photo above), there are Li River cruises that last between 2-4 hours, down the river to Yangshuo. Starting from Bamboo Wharf in Guilin, an official tour boat leaves every morning, cruising down the Li River in five hours to Yangshuo wharf. During the rainy season, the river flows faster so the cruise to Yangshuo may take four hours but in dryer months, the river moves slower, meaning the cruise duration can stretch to six hours.

Yangshuo VIllage Inn can arrange tickets for the Li River cruise, as well as pickup at Yangshuo wharf. To book tickets in advance, contact us here.

Starting all the way up in Guilin, Li River cruises on large tour boats are the most popular way to see the river. The downside is that dozens of tour boats operate on the river causing a large amount of traffic and noise. Nevertheless, it is still a great alternative to taking a car or bus from Guilin to Yangshuo. The price for the cruise is relatively high but includes lunch (average Chinese dishes) and you can bring your luggage onboard.

This particular section of the river is known as the Golden Waterways and includes the most famous local peak, Nine Horse Mountain. The small family boats which can take you on this trip are mostly unlicensed which means they’re not supposed to take tourists. However, if you set off early in the morning or late afternoon you should be able to get one.

Take a local bus from Yangshuo to Xingping and walk to the boat landing. Here there are many locals offering boat trips upstream. You can ask to be taken to Yangdi and back but prices vary so remember to bargain hard (start at 30% less) in advance. The trip takes over an hour one way and is arguably is the most scenic part of the Li River, with giant limestone peaks, sub tropical forest shading the banks and long white pebble beaches.

Catch the local bus from Yangshuo to Xingping. From here take a small farmers boat at the Xingping landing, downriver about 30 minutes to the Fishing Village. The boat tour takes 40 minutes coming back, but allow for around four hours round trip to have enough time to visit the Fishing Village. Apart from the well preserved Ming Dynasty architecture and wood carvings dating back more than five hundred years, the Fishing Village is worth seeing for its natural Feng Shui alone. Encircled by seven forested peaks and two stone guardians at the village entrance, the modern world has largely bypassed this highly spiritual place.